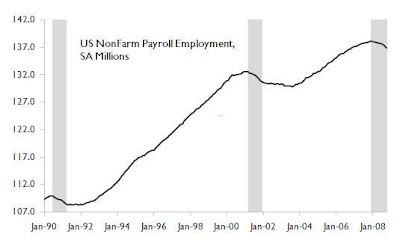 Some reports are suggesting all of 2009 will be slow. If that is the case, this will be the longest recession since the depression. it remains to be seen if it is the deepest. I guess the business cycle is alive and well. Here is the employment series for the region. 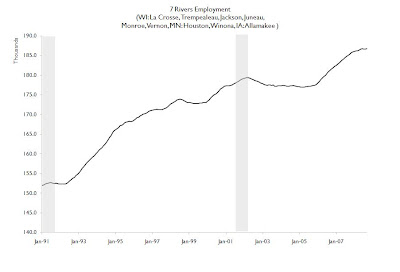 Posted by Taggert at 5:44 AM No comments:

My first entry shows the distribution of immigrants to the US from continent of origin. The problem with this visulaization is that it does not give you a sense of the changes in the total number of immigrants per yer. 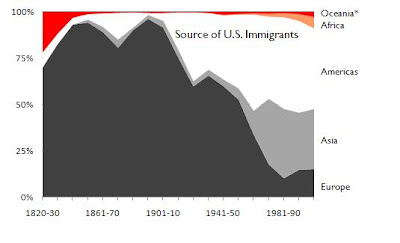 Despite using color brewer, I went with a diverging data color scheme even though this is not diverging data. I felt the qualitative data color schemes suggested did not provide a stark enough contrast. Below I just made up some color combos. The second entry, uses data on US population to put the immigrant flows into perspective. Now we have a stacked area chart which represents the percentage of the US population that are new immigrants and their continent of origin. 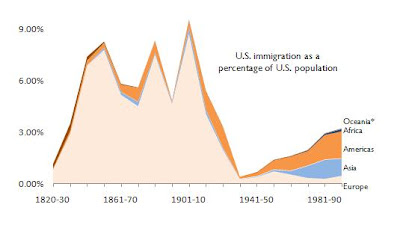 Africa and Oceania get totally lost when visualizing the data using a stacked area chart. But short of including more info, I'm not sure how else to represent the data. After all some of that is justified by the small amount of immigration from Africa and Oceania, but it is not zero and you should be able to discern it. It is clear from the above that before WWII there was massive immigration, almost entirely from Europe, and after immigration has been rising from everywhere but Europe.
Posted by Taggert at 2:25 PM No comments:

The study suggests that self-diagnosis by search engine frequently leads Web searchers to conclude the worst about what ails them.

The researchers said they had undertaken the study as part of an effort to add features to Microsoft’s search service that could make it more of an adviser and less of a blind information retrieval tool.

Although the term “cyberchondria” emerged in 2000 to refer to the practice of leaping to dire conclusions while researching health matters online, the Microsoft study is the first systematic look at the anxieties of people doing searches related to health care, Eric Horvitz said.

Mr. Horvitz, an artificial intelligence researcher at Microsoft Research, said many people treated search engines as if they could answer questions like a human expert.

Posted by Taggert at 8:30 AM No comments: