The articles for this week:

Extra Credit: Point out all the crazy economic ideas in this analysis

Wonkblog has an interesting graph: Posted by Taggert at 3:18 PM No comments:

Apparently the editorial board at the New York Times doesn't understand Deadweight Loss. The say:

Voters don’t react positively when a candidate speaks incomprehensibly about taxes, as Mr. Romney did on “60 Minutes.” He said he would lower everyone’s tax rate by 20 percent but that everyone would wind up paying essentially the same taxes because he would limit unspecified deductions and exemptions. Even on its face, that makes little sense. If everyone will pay the same taxes, how does that stimulate growth or reduce unfairness? In fact, tax experts say the rate cut is such a huge benefit for the rich that it can’t be balanced by curbing their deductions. But listeners don’t have to do the math to calculate how fundamentally hollow the proposal is.

I'm not arguing that the cut in rates (and here I assume he was specifically referring to the top marginal rate) will actually be revenue neutral, though Feldstein and Rosen argue its feasible. Krugman and others suggest the cut in top marginal rates is too large to be offset by base broadening. I am suggesting, if it were possible it is easy to think about how that stimulates growth and reduces unfairness. Think of lower top marginal rates lowering the incentive to hide income as an example.
Posted by Taggert at 1:24 PM No comments:

Differences In Life Expectancy Due To Race And Educational Differences Are Widening, And Many May Not Catch Up


Abstract: It has long been known that despite well-documented improvements in longevity for most Americans, alarming disparities persist among racial groups and between the well-educated and those with less education. In this article we update estimates of the impact of race and education on past and present life expectancy, examine trends in disparities from 1990 through 2008, and place observed disparities in the context of a rapidly aging society that is emerging at a time of optimism about the next revolution in longevity. We found that in 2008 US adult men and women with fewer than twelve years of education had life expectancies not much better than those of all adults in the 1950s and 1960s. When race and education are combined, the disparity is even more striking. In 2008 white US men and women with 16 years or more of schooling had life expectancies far greater than black Americans with fewer than 12 years of education—14.2 years more for white men than black men, and 10.3 years more for white women than black women. These gaps have widened over time and have led to at least two “Americas,” if not multiple others, in terms of life expectancy, demarcated by level of education and racial-group membership. The message for policy makers is clear: implement educational enhancements at young, middle, and older ages for people of all races, to reduce the large gap in health and longevity that persists today.

Posted by Taggert at 9:46 AM No comments:

I'm on the board for the La Crosse Fitness Festival. It was recently announced that we will be suspending the Marathon and running a Half Marathon race starting on Grandad bluff. In order to plan the event start time we wanted to consider the finish times of the 2012 race. Obviously the new course will be faster, and probably the fastest course in the state, but it will give us an idea of how many people finish at any given time and when the majority of runners finish.

Taking the results from 2012 I've computed the total number of minutes totmin.

Fastest runner completed it in 74.01 minutes. The slowest was 227.3 minutes. The race has an official cutoff time of 4 hours. There were 1096 finishers, with an average time of 124.47 minutes. The standard deviation was 23.43minutes.

Below I have some STATA graphs with the distribution of finishers by time. The y axis is frequency(count), the x axis represents total minutes and the bins are 10 minutes wide. I’ve also included one below that which has the bins set at 1 minute wide. So that gives you a sense of at the finish line how many people will finish in a particular minute. The largest was 30 people at 2 hrs 6 minutes. 76% of the runners finish between 1 hour 35min (95min) and 2 hours 25minutes (145min). Only 31 people took longer than 3 hours. 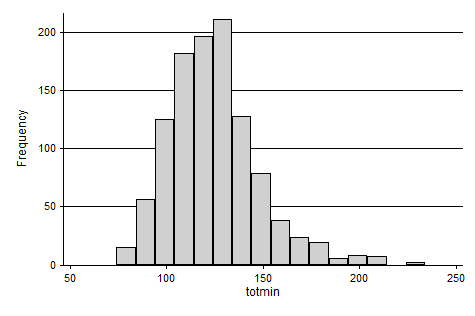 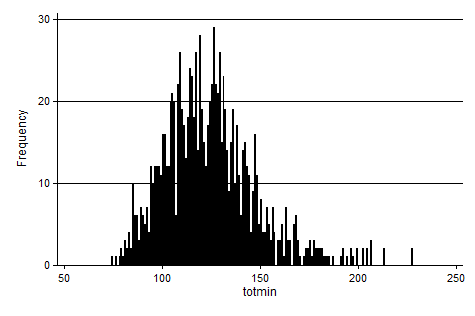 Here are the readings for tonight, with some others I plan to use if not tonight in the future.

Here are a few more articles I want to keep in the back of there mind. In a scary new paper by Robert Gordon, he lays out the end of growth as we have known it.

Is Economic Growth Over? Robert Gordon

From our discussion last week about the impact the iPhone 5 and its potential impact on GDP, Paul Krugman notes the inherent fallacy with hailing GDP as the measure of well being.

Broken Windows and the iPhone 5 Paul Krugman
Posted by Taggert at 3:56 PM No comments:

Below is an excellent episode of "This American Life" which focuses on Heckman's work on non-cognitive skills, or soft skills, or personality, or whatever you would like to call it on life outcomes. Among the many gems in the episode includes some great insight into the failures of the historical ways in which we removed kids from the classroom for "special-ed".

Posted by Taggert at 7:51 AM No comments:

Two students sent along the following for us to discuss this week:

Boxed in: Global trade has turned down sharply this year. The outlook is pretty bleak, too

Both are related to the macro consequences of a decrease in trade.
Posted by Taggert at 11:16 AM No comments:

A BUS 230 Instructor sends along the following:

I heard this on NPR this morning and I plan on using it soon for my BUS 230 sections. Stanford did some research looking into the benefits of eating organic food and were unable to identify any health benefits and they got all sorts of negative feedback for reporting it. It is a great example of people attacking the data because they do not agree with the results vs looking at the results scientifically and trying to determine why the results do not support their hypothesis. At the end they have someone on to talk about how people get emotionally involved in the idea of organic food and what it represents and how they get defensive when scientific data does not match their perception (their reality). This happens to us when we present research findings all the time which is why I emphasize that the preliminary steps in the research process are so important. If your research questions and methodology is sound, you can defuse the situation when people start attacking the data and redirect them to look at what the data is really telling them, challenge their assumptions, etc...

The article is here and you can listen below.

Posted by Taggert at 2:54 PM No comments:


The labor force participation rate, or the percentage of Americans who either have a job or are looking for one, fell to 63.5 percent -- the lowest since September 1981.

As Bernanke notes in his Jackson Hole Speech.


"The stagnation of the labor market in particular is a grave concern not only because of the enormous suffering and waste of human talent it entails, but also because persistently high levels of unemployment will wreak structural damage on our economy that could last for many years."

And the Chicago Fed President Evans makes a plea to do more:


Finding a way to deliver more accommodation — whether it is monetary or fiscal — is particularly important now because delays in reducing unemployment are costly. An unusually large percentage of the unemployed have been without work for quite an extended period of time; their skills can become less current or even deteriorate, leaving affected workers with permanent scars on their lifetime earnings. And any resulting lower aggregate productivity also weighs on potential output, wages and profits for the economy as a whole. The damage intensifies the longer that unemployment remains high. Failure to act aggressively now could lower the capacity of the economy for many years to come.

... I have outlined some policy actions that I think can take us in the direction of a more vibrant and resilient economy. Given the risks we face, I think it is vital that we make such moves today. I don’t think we should be in a mode where we are waiting to see what the next few data releases bring. We are well past the threshold for additional action; we should take that action now.

His full speech is here.
Posted by Taggert at 9:22 AM No comments:

There is an art to being a good public speaker. Practiced enough to not trip over words, or veer off on a tangent, yet casual enough to not sound too rehearsed. People need to hear sincerity and feel the passion in your voice, not a robotic recitation. At the 2012 DNC convention Bill Clinton gave a good example of how one might deviate from prepared text to deliver just such a speech. The comparison between prepared and contemporaneous remarks is useful.
Posted by Taggert at 8:36 AM No comments:

Here are a couple of graphs from FRED.
Non-Farm Payroll Employment.
Real GDP.
CPI.
Unemployment Rate.
Posted by Taggert at 5:16 PM No comments:

Posted by Taggert at 2:31 PM No comments: