Do you want to join the one percent? Getting a degree from the college of business increases your chances. The NYT breaks down the top one percent by undergraduate degree. 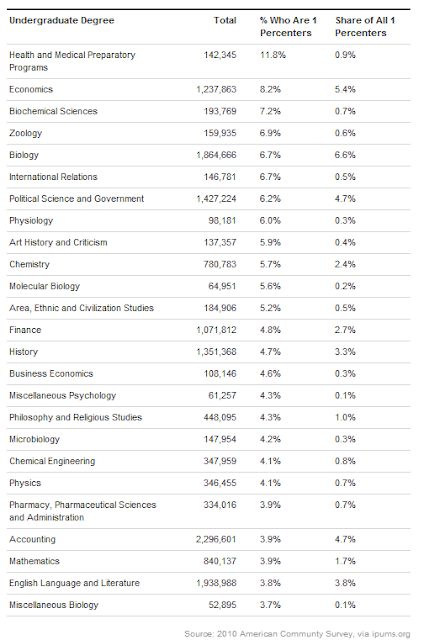 Posted by Taggert at 6:37 AM No comments:

What Not To Do

A great example of how not to design and deliver a presentation. In this commercial Microsoft demonstrates why they suck, or at the very least why their Ad Agency sucks.
Posted by Taggert at 6:24 PM No comments:

Below we have a chart that visualizes the rate of binge drinking by state, which I'm grabbing from this blog. The Midwest to some degree, and the colder northern regions to a larger degree, appear to have the highest rates. What are some theories that can explain this relationship?

Here is yet another great reason I have trouble respecting Krugman these days. In fact at one point thought I would write a blog post listing all of his intellectual flips, but the list grew too long. As Alex points out at the end:


Now to be fair, Krugman covered himself in 2003 in a credible way he said “unless we slide into Japanese-style deflation, there are much higher interest rates in our future.” Thus, I do not fault Krugman’s forecasting ability. What I do fault is that despite a 180 degree about-face, one thing remains constant in all of Krugman’s writings, anyone who disagrees with him is portrayed as a mendacious idiot. In truth, Heritage today and Krugman 2003 both have legitimate concerns about the long-term debt situation of the United States and it would have been to the credit of Krugman 2012 had he acknowledged that point more fairly.

Yeah, Krugman covers his bases so as to have intellectual wiggle room. I get the reasons he does what he does - as a rhetorical style. But as an academic, I don't respect the lack of intellectual honesty and lack of openness Krugman now has. They were qualities I had so admired in the Krugman of old, despite our policy differences.
Posted by Taggert at 1:01 PM No comments: